Automatad Team
“We intend to experiment with this over the next several months, and to launch this intervention on Chrome stable near the end of August”
Share Tweet Share

WPP’s media buying unit GroupM was the most affected unit of the multinational holding company during the pandemic. The holding company has not revealed the exclusive GrupM numbers but there has been an overall 19% revenue decline ($3.6 billion) in Q2 and 12.3%  ($8.4 billion) in the first half of the year. But GroupM also witnesses growth from the e-commerce sector. The revenue from e-commerce grew by 19% in the first half and now it makes up 18% of GroupM’s digital revenue.

Programmatic Display in the US 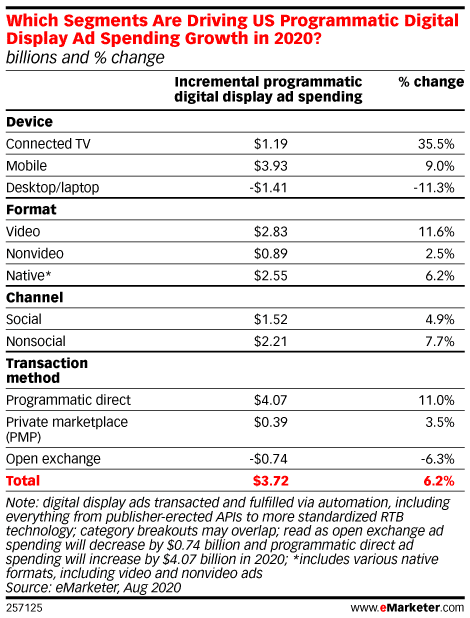 Australia’s digital market ad spend shrunk by $200 million in the past six months. On December 31, 2019, the ad spend was recorded at $9.1 billion whereas, on June 30, 2020, the ad spend clocks at $9.1 billion. The change has occurred due to cyclical factors as well as due to the global pandemic.

Australia’s decline in ad spend is not at all alarming. On the contrary, we have seen many instances where digital is performing better than the overall advertising industry. In the case of GroupM as well, we are seeing how e-commerce stands strong despite falling numbers everywhere. Considering the current situation, the US market is also performing well.

Apple has been selling its devices by promising privacy for a long time. But there have been instances like Safari ITP when Apple has hurt the interest of the whole ad tech industry in the name of privacy. Repeating the history, Apple has once again brought a new offering for its users that’ll hurt the ad tech industry.

After the release of iOS 14, the iphone users will be asked whether they are comfortable being tracked across apps and websites. Tracking the user activity will be possible only if the users permit for it. 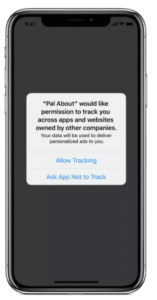 The move can have dire consequences for the publisher community. Once the users deny permission, it wouldn’t be possible to serve targeted ads to them. If the advertisers cannot serve targeted ads, the rates on Apple devices can fall heavily, resulting in lower revenues.

How much would the publishers be affected? Facebook anticipates a fall of 50% in revenue whereas Weather.com thinks iPhone revenue will go down by 40%. A Tap Research survey found that 85% of the respondents would opt-out of being tracked.

The app makers may find other ways to earn revenue from their users but Publishers with a majority of iPhone users will be affected the most by this update. We can only hope that the industry will come with a workaround for the problem or Apple agrees to provide some solution.

With the release of Chrome 85, Google is also expected to release a default setting that’ll block all the ads violating its heavy ad intervention policy. The exact schedule of the release is not known but Google says, “We intend to experiment with this over the next several months, and to launch this intervention on Chrome stable near the end of August”

Any ads consuming more than 4 MB of mobile data or more than 60 seconds of total CPU usage is considered as a heavy ad by Google. While only 0.3% of the total online ads consume resources at such levels, they consume 27% of total network data consumed by the ads on the internet.

Many publishers complained that Google has given them no intimation even when they are working with the company’s representatives. For other publishers, the deadline appears to be too short.

Not every publisher should expect a significant difference in revenue. The publishers who rely on long-form video ads and rich-media ads may find their ads being blocked due to large size.

Email as the Next Identifier

The Trade Desk’s Unified ID, LiveRamp’s Identity Graph, IAB’s Project Rearc, and many other identity solutions in the industry have email at their core. Would email be the main instrument for identifying users across the web in the future? The Adexchanger recently questioned some prominent industry professionals about their opinions on email as the main identifier in the post-cookie world, here are the snapshots of what they think:

Katie Anderson, programmatic media lead, PMG: Instead of relying on a single source, a combination of email with other high-quality sources, such as contextual technologies and log-level data should be used to paint a clear picture.

Tom Kershaw, CTO, Magnite: Email will have a significant role in the post-cookie world. It will coexist with other solutions like first-party data and browser-centric systems.

Jakob Bak, CTO, and co-founder, Adform: Around 10% of the traffic is logged-in, it can reach up to 20% in the coming years but the email won’t solve the problem with the remaining majority of the traffic.

Axios reports that on Tuesday, Facebook is about to announce its News Tab in countries other than the US. The publishers in the News Tab may get paid by Facebook just like they do in the USA. It is also being said that Australia won’t receive the new feature for now due to the legal battle Facebook is fighting in the country. The company is yet to come up with a payout framework for the country as the discussion with the Australian Competition and Consumer Commission is still underway.

Multiple countries including the U.K., Germany, France, India, and Brazil. Are expected to receive the news tab in the coming 6-12 months. As per Axios, if Facebook starts paying out to publishers in a country, then it can avoid establishing unfavorable terms with the regulators of that country. It’s important to note that Facebook does not pay each and every publisher who is included in the news tab.

How Asia Pacific publishers push back vs Google, Facebook – Rappler

How to Optimize Priv...

Next Post
How to Monetize Mobi...
0 Comments
Leave a Reply Cancel Reply