The worldwide mobile ad spend soared by 71% YoY in the second quarter of 2020. The Q2 ad spend was also 8% higher than the ad spends in Q1 2020. More and more people were at home, using their smartphones during the pandemic which resulted in this meteoric rise. Another shocking revelation is the huge spike in mobile video ad spend. The mobile video was hit hard at the beginning of the pandemic but in Q2, it came back to pre-pandemic levels with a growth of 116%.

Improving Ad Spend in the US 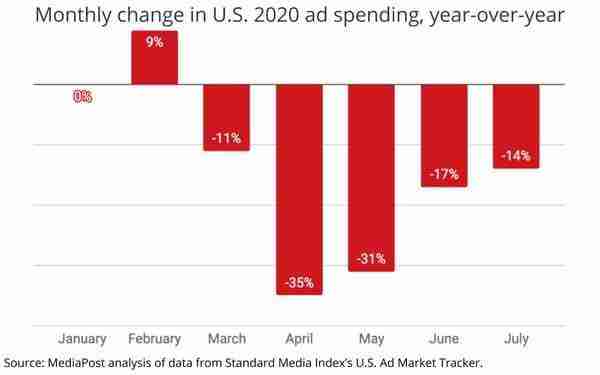 Programmatic has been rising as the preferred mode of digital advertising around the world. When comparing with the numbers in 2016, programmatic advertising has risen from 16% to 41% of the global digital media ad spend. But the adoption rate has been varied depending upon the region. The APAC region now accounts for 20% of the worldwide programmatic ad spend. APAC advertisers also lead in the world in using the first-party data. 54% of the APAC advertisers are either fully or significantly using the first-party data in their ad campaigns.

The Duopoly will lose its market share in the UK

As per a report by eMarketer, the digital ad market share of the Google-Facebook duopoly is expected to fall to 65.9% this year, due to the pandemic. Before the outbreak in Feb 2020, the duopoly was expected to grow to 67.8% of the market. However, the market share will return back to normal by 2021. 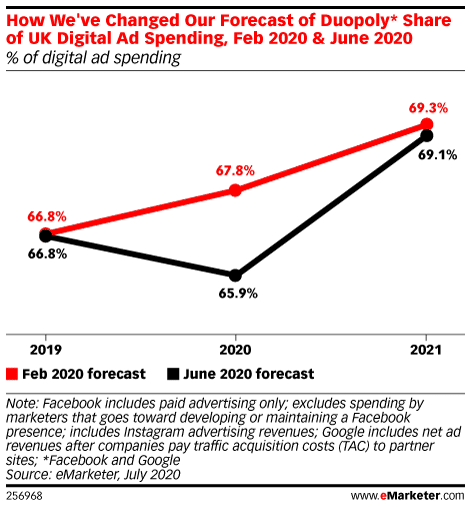 The trends in the adtech industry have always been in favor of digital publishers. The significant rise in mobile ad spends shows that every publisher needs to take the mobile web seriously. There has been a constant correction in the US ad spend as well. it shows that the overall marketing industry will be back on track soon.

The publishers should not only focus on building a strong programmatic infrastructure, but they should also be ready for the growing preference for first-party data from advertisers.

Dealing with the crisis

How the industry players are surviving in the current difficult time.

Group Nine recently launched two new verticals from its two brands. Group Nine’s NowThis launched NowThis Kids and The Dodo (another brand from the publisher) introduced DodoWell. What’s important to notice is that both the launches were done with the help of launch partners. While NowThis had Cheerios as its sponsor The Dodo had Petco to support its launch.

The sponsorship deals of this nature bring in long-term partnerships for publishers. The upfront investment from the brands are high, the plans for branded content (episodes, newsletters, stories, etc) are pre-planned, they decrease the publisher’s reliance on ads and help them to diversify their source of revenue. At the same time, advertisers get the assurance that their message will be delivered in a brand-safe environment.

Travel has been the worst-hit industry during the pandemic. The months in Q2 saw the declines ranging from 80% to 93%. Not only did the advertisers stop spending on marketing, but even the audience stopped visiting travel sites. To fight with the situation, the first action that the publishers could take was to change their content strategies.

The Culture Trip pivoted to content about streaming services, alcohol, and groceries. Many publishers created content related to local trips and domestic tourism. Condé Nast Traveler will be talking about the precautionary measures being taken by hotels and other businesses to keep the travelers safe. Buzzfeed’s BringMe will be discussing more about staycations.

A newer content strategy is definitely not enough to make-up for all the losses, but it’ll be helpful to some extent.

GP started posting Instagram stories about work-from-home setups. The videos showcased the brands and products that their editors use in their homes. Any viewer interested in the product could swipe up the story to reach an article about that product on GP’s site. The same article also had the affiliate links to the mentioned products.

Revenue diversification is the need of the hour. Publishers in verticals like travel have no other options than changing their strategies. Group Nine’s sponsorship strategy will help the publisher in decreasing its dependence on ad revenue. Changing content will help publishers with bringing in users that would otherwise have stayed away from the publishers’ site.

How Publishers are Engaging Audiences with Audio?

Providing audio versions of articles is a new trend among publishers. The busy readers with no time to read can listen to the articles and stay updated. Emily Chow, Director of Site Product, The Washington Post says:

“We conducted user research and learned that users want to stay informed but are busy, so they appreciate an option to get up to speed on the latest news developments while cooking dinner, running errands or exercising,”

The Economist, The Washington Post, Bloomberg, the BBC, The Financial Times, and The New York Times are some of the many publishers who are offering audio content to its visitors. The popularity of podcasts shows a promising future to the publishers where there’ll be a demand for audio articles, the tools for monetizing audio are already in-place and are rapidly evolving. For instance, there are apps like Audm, Curio, and Noa that provides audio versions of long-form articles from multiple publishers, and the users can pay subscription fees to access them. 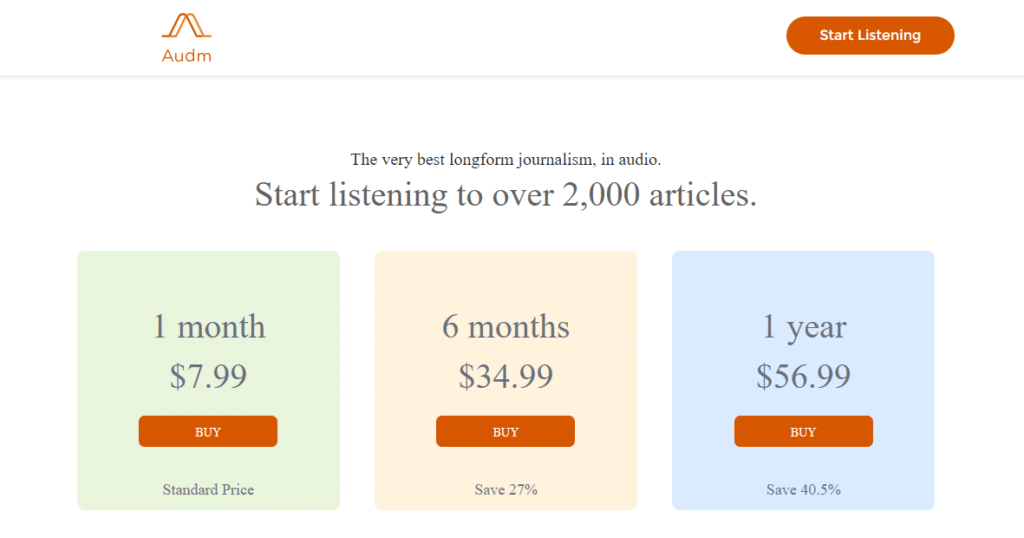 As per WNIP, when the Danish publisher Zetland started creating audio content, within two months, 40% of the content on the site was consumed in audio format. Within 6 months, the share of audio reached 50%.

Publishers need to keep track of this new trend. If it is picking up then every publisher should try to engage the audience. You have to find ways of creating engaging audio content. Currently, it won’t be hard to find text-to-speech solutions for content creation but we recommend you to have real humans do the job.

The reason behind our suggestion is that sometimes text-to-speech software can create a monotonous and robotic voice which may hurt the user experience. Additionally, platforms like YouTube are against monetizing machine-generated audios, if other platforms follow the suite then it can create problems for you in the future.

A martech company called AudienceProject claims that fewer people today are annoyed by online ads. The claims are based on a survey conducted with 14,000 participants across The US, the UK, Germany, Denmark, Sweden, Norway, and Finland. Does it mean that lesser people are using ad blockers? Well, as per the survey, “From 2016 to 2020, the share of the online population using ad blockers has decreased across all countries.” 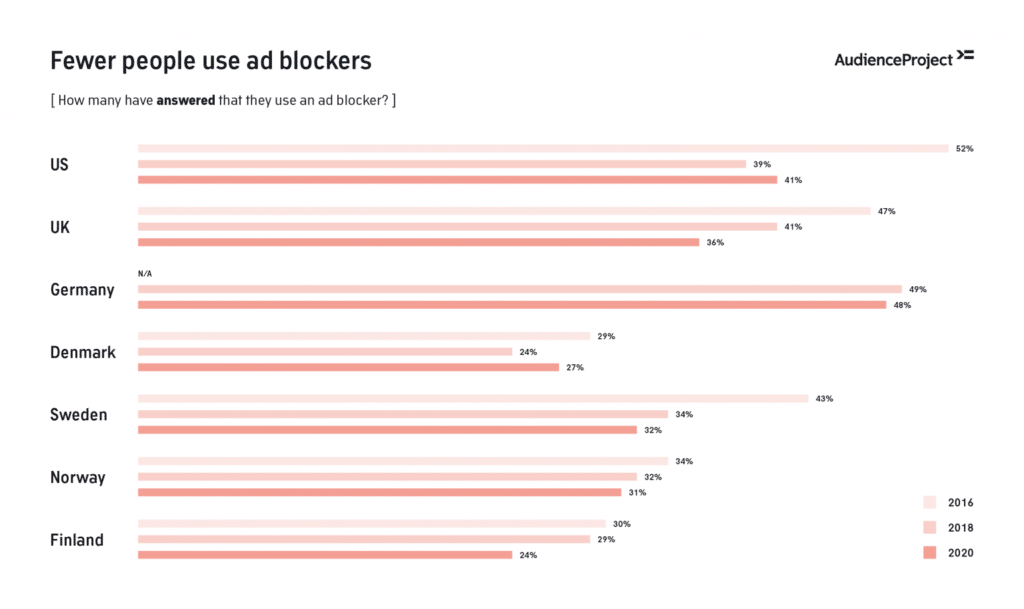 One of the interesting findings of the survey is that most people are annoyed by the irrelevance of the ads. Irrelevant ads are one of the reasons behind people installing ad blockers. It is interesting because we also hear about the issue of highly intrusive ads every now and then. Looks like the ad tech industry is in the need to create a balance between non-targeted and highly targeted ads. 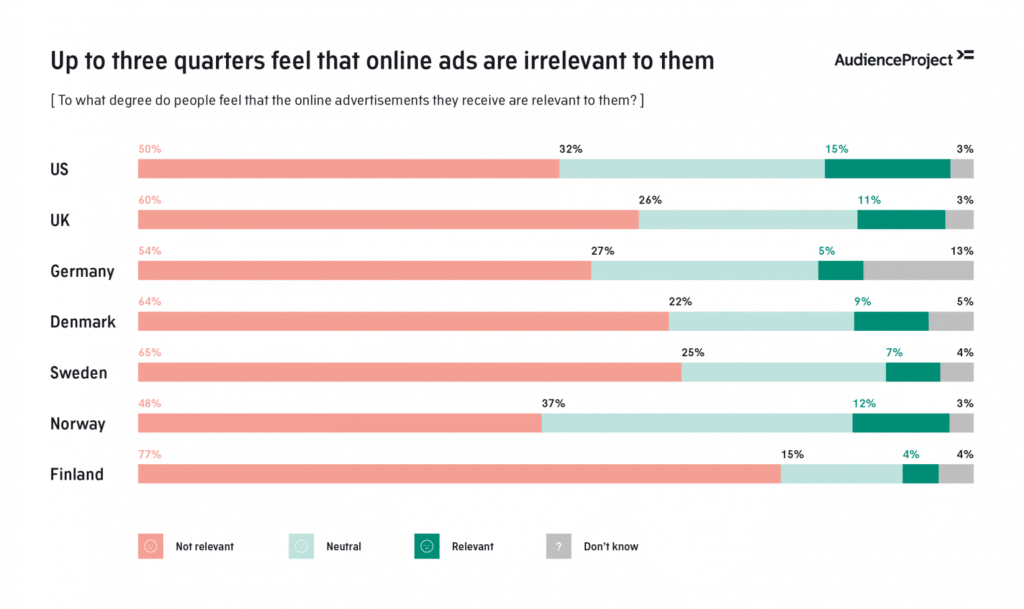 To help the industry in keeping a tab on adblockers, it is the duty of every publisher to maintain the best user experience. Take the help of our article on Google Ad Experience Report