The pandemic is making it difficult for people to get out of their homes and more and more people are spending most of their time online. The changing lifestyle is making advertisers restructure their spending. Latin America is the latest example of the shift that’s taking place on the demand side.

eMarketer expects traditional media spend to shrink by 17.5%, at the same time, the share of digital is bound to expand. In 2020, the digital ads spend will account for nearly 40% of the total for the first time. The coming years will see a further increment in the share of digital. 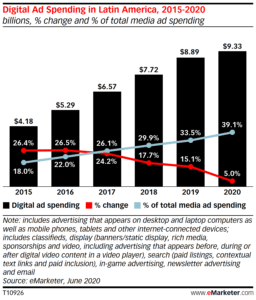 Columbia, Chile, and Brazil are going to be the top three countries to experience the rise of digital. 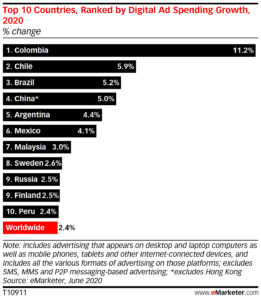 Rising Podcast revenue despite the pandemic

The podcast market is poised to witness almost 15% increased ad spend in 2020. The growth will take the market to a $1 billion level. Although the growth is on the positive side, it is still lesser than what was expected before the pandemic arrived. Pre-pandemic projections showed an almost 30% increment in 2020, 55% in 2021, and 36% in 2022.

It’s been an established fact  that digital will be the least affecting medium of advertising. The expanding market of podcasts is another opportunity for publishers to increase their ad revenue. Venturing into podcasts will diversify your content formats as well as your revenue streams.

The Atlantic moves its events online

The transition from physical to virtual will save the publisher from completely losing the sponsorship revenue. Instead of 20%, this year the publisher expects that events will contribute between 5% to 10% of its income.

The Pinknews’ strategy for paid memberships

The UK-based LGBT+ focussed publisher is about to launch a membership scheme. Here are the highlights of its strategies, read them to formulate ideas for your own membership programs:

In its bid to embrace the first-party data strategy, the New York Times has built 45 new audience segments so far. The segments are based on age, income, business, demographics, and interest categories. 30 more segments are to be introduced by the end of the year. The publisher has started using the existing segments for its campaigns since July.

Sasha Heroy, the Senior Director, Ad Products, and Platforms was recently interviewed by Digiday. She says that they’ve focussed on creating segments that are most heavily used by the advertisers. Educating advertisers about using alternatives to third-party data is a small challenge in the transition process.

But the advertisers are willing to use first-party data over the third-party data owing to the reliability issues. On the users’ side, being transparent about how their data will be used by the publisher has encouraged the users to provide their data.

The pandemic, as well as the end of the third-party cookie, are big challenges in front of the publishers. Virtual events, membership plans, and shifting to first-party data use are some of the ways of dealing with them. Every publisher should learn from such examples to make their own strategies effective.

How Google May Defend in the Anti-Trust Case

The New York Times reported about a 67-page document that was submitted by Google to the Australian regulators to explain how it does not dominate the ad tech industry. The publisher believes that the arguments given in the document may be used by the tech giant in the current federal antitrust lawsuit as well. Here are the key arguments from the document:

Google’s representatives argue that Google has made the ad buying process more efficient and it has provided strong alternatives for buyers as well as sellers of ad space. The company has also made it impossible for its products to have the guaranteed final bid in an auction.

While we are discussing how Google says it faces a lot of competition, the Adexchanger reports that Google has reclaimed its throne in the DSP market. It surveyed 347 brand marketers and agency buyers to find out the most used demand platform. It found that 45% of the respondents are using Google’s Display & Video 360. 43% are using Amazon Advertising and 41% are using The Trade Desk. Verizon Media and Adobe Advertising Cloud are being used by 20% to 30% of respondents.

Killing the competition by unfair practices and being the leader in a market can be two completely different scenarios. The experts are the right people to comment on such issues. We hope that if publishers are at an unfair disadvantage due to the malpractices of a single entity then the law will take care of it and eventually everyone will be on the even ground.

Google’s upcoming Adsense policy prohibits advertising and monetizing content that promotes products that can be used for spying.

The updated policy will prohibit the promotion or monetization of content that enables a user, or promotes products and services that enable a user, to track or monitor another person or their activities without their authorization. This policy will apply globally.

Failing to adhere to the policy can have grave repercussions for publishers:

Content that falls under the Google Publisher Policies is not allowed to be monetized and you should not place ads against that content. Attempting to monetize policy-violating content may result in your account(s) being suspended or terminated.

On its policy page, Google has given the examples of some of the products that fall into the list of prohibited products: Spyware or malware that can be used to monitor texts, phone calls, or browsing history; GPS trackers specifically marketed to spy or track someone without their consent; promotion of surveillance equipment (cameras, audio recorders, dash cams, nanny cams) marketed with the express purpose of spying. Please note that the above-mentioned products are just examples and not an all-inclusive list of prohibited products.

What should you care about?

If you are a publisher with such content then you should stop monetizing it with Google’s ads. You should also be prepared for a fall in CPM after the removal of Google from the demand side. The falling CPM may also hamper the ad quality on your site. It’s better to change your content strategy and avoid creating content around spyware.

Mergers and Acquisitions in the Time of Coronavirus – AdWeek