Automatad Team
Industry was quite active last week. From new identity solution to Google adopting Sellers.json, there's a lot to keep up with. Let's dive in.
Share Tweet Share

COVID-19’s Impact on Payments and Revenue

Since the pandemic has started, every week we are informing you about its impact on publishers. Here are the important trends for you:

As expected, the payments have started to get delayed. Out of the 127 executives in the Digiday survey: 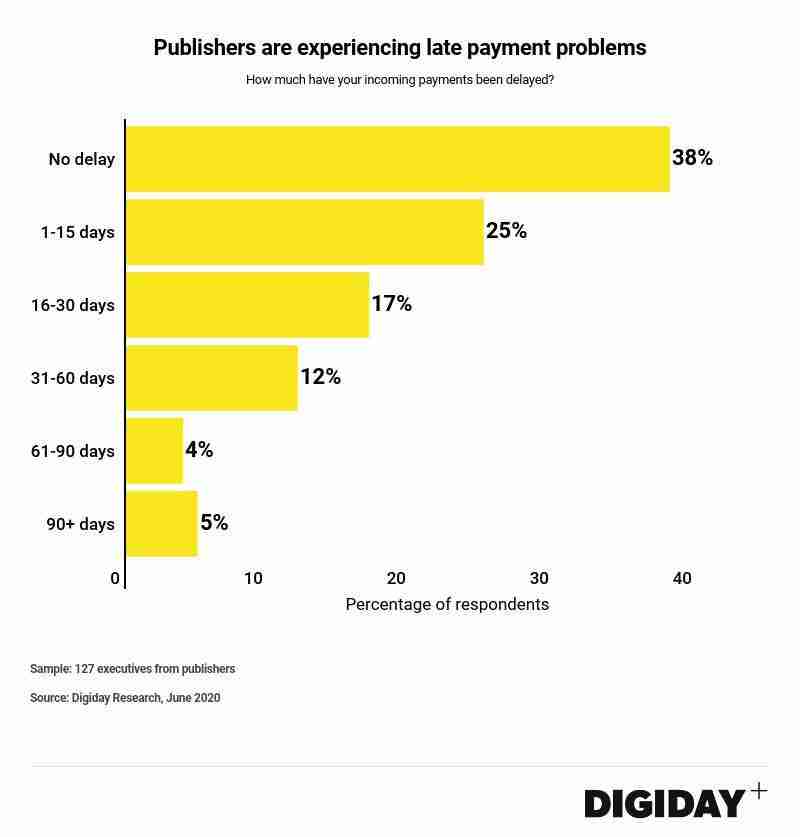 75% of publishers are facing problems in ad sell-through and keyword blacklisting is still a problem for 43% of the publishers. 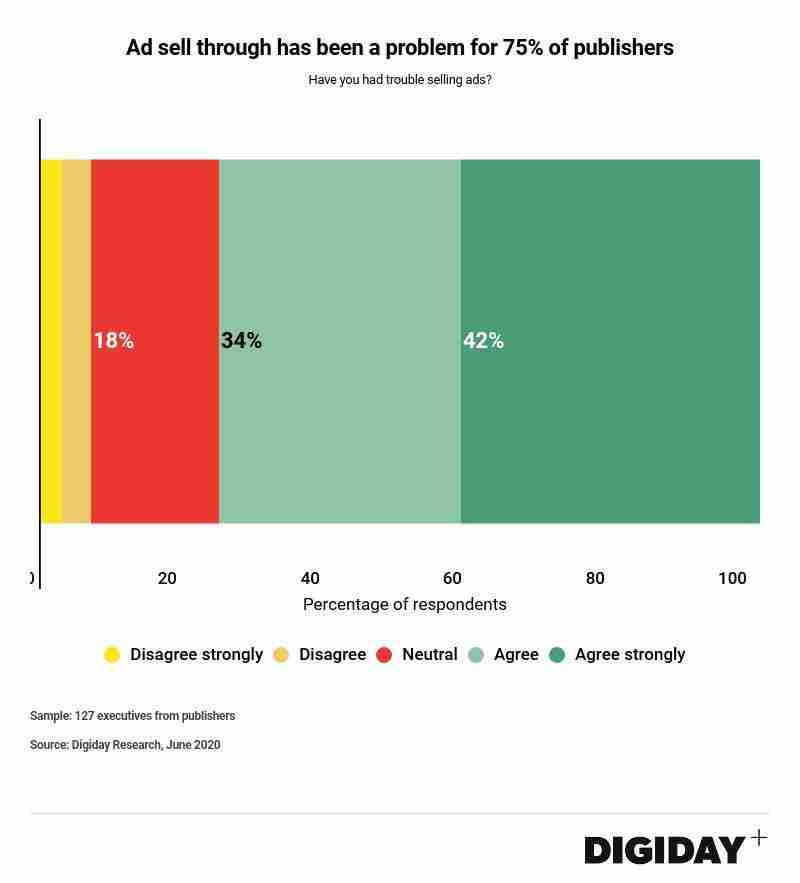 The problem of sequential liability has always been there in the ad tech industry. If the advertisers will delay the payments on the buy-side then ultimately the publisher will suffer. We have talked about payment protection insurances multiple times, publishers should protect themselves with such instruments. Selling ads will remain a problem until other businesses are not coming back to the normal state, publishers can only wait for the rates to go up. We suggest diversifying revenue sources to mitigate the overall losses.

The Future of Subscriptions

Increasing traffic and subscriptions have been the norm for publishers in the past few months. The subscriptions are becoming the new sources of revenue but they are not proving to be large enough to stop publishers from laying off employees. Gaining new subscribers also involves the cost of acquisition. If the subscriber churn rate is high then the customer lifetime value falls and results in low revenues.

As publishers are offering free or discounted trials to the users, the revenue per subscriber has dropped by 59% Y-o-Y between March and May. At the same time, the growth rate for digital news subscriptions grew by 110%.

So what should publishers do?

The CEO of subscription platform Zephr, James Henderson says that publishers should never spend more than a third of their average lifetime customer value on acquiring new subscribers. Also, retention improves with tailored products and pricing. Publishers should not miss re-acquiring lost subscribers too.

Increased traffic leading to higher subscription rates is not the end of the story. Publishers have to think beyond it. Pay attention to the cost of acquisition, focus on customer retention, think about strategic pricing. The planning, implementation, and optimization of your subscription strategy should be an ongoing process.

Google recently posted its Sellers.json file on June 9, and it is being considered as incomplete and opaque. Before discussing the matter, let’s understand the backstory:

Last year, IAB Tech Lab released Sellers.json as a Supply Path Optimization initiative. Sellers.json, along with OpenRTB Supply Chain Object was designed to bring more transparency in the ad buying process. Since there are a lot of intermediaries involved in delivering an impression, it becomes hard to keep track of who is reselling whose inventory, and whether they’re authorized by the vendor that has the direct relationship with the publisher. This shortcoming allows unauthorized resellers to take advantage of the situation, as a result, the price of the inventory inflates unnecessarily.

Sellers.json helps in finding the resellers that can be removed from the supply path without any negative impacts. It does so by identifying direct sellers and intermediaries in the supply path. Interestingly, it also categorizes Google’s exchange bidding as in intermediary. Google takes a fee for buying inventory from its exchange. Since the motive of the buyers is to minimize intermediaries in the transactions, it can potentially lead some buyers to skip Google and move towards Prebid. This is why Google has also opposed being categorized as an intermediary in the past.

As the ad tech companies are releasing their sellers.json files, Google also did the same. But an analysis by Jounce Media says that Google is 7 months late when compared to its peers with an equal number of publishers working with them. It is also incomplete as a large number of publishers are excluded from it. Another large number of accounts is kept confidential in the file. For comparison, here is a graph by Jounce Media: 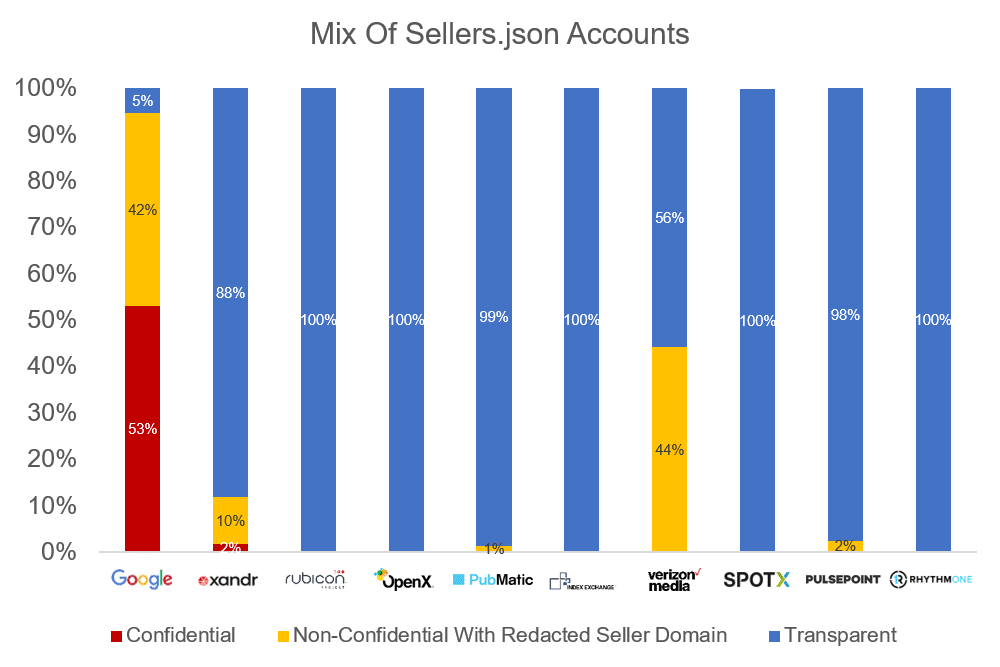 Google, however, says, “Given the size of the ship, these things do take longer than we would like them to,”

Ad Tech companies, LiveIntent and Rubicon Project have joined their forces for the cookieless future. LiveIntent specializes in monetizing emails and first-party for publishers. Rubicon Project provides advertising solutions for buyers as well as sellers. Now both the companies will work together to help media buyers do business on a non-cookie-based ID.

Both the companies together will be using LiveIntent’s Authenticated Bridge that uses hashed email addresses to facilitate the buying process in a manner similar to the third-party cookie. Additionally, the Authenticated Bridge uses a host of first-party data signals for better targeting. The solution is open for adoption by anyone without the need of signing any agreements.

Apple and Mozilla stopped their support for the thor-party cookies long back, later Google announced the same. It was clear that the days are numbered for the third-party data, so the industry started running for a solution named Universal ID. LiveIntent is not the only one with such a solution in the industry. Many companies are coming up with ID solutions and many more will come in the future as well.

First-party data will be one of the most precious commodities in the future of Ad Tech companies. To stay above the curve, all the parties (including publishers) have to build the solutions to use it before the cookie fades away. There will surely be ad tech companies to help publishers in this matter, but the publishers should also stay aware of their options.

The State of News Publishers

The Reuters Institute has released YouGov’s survey of over 80,000 online news consumers in 40 markets. Here are the key findings for publishers:

Trust plays a vital role in the success of news publishers. Make sure your news comes from trustworthy sources. Invest in people that can create high-quality content. Avoid bias as most readers prefer news without a point of view. Maintaining quality and trust will surely give you returning users that can even convert to become your subscribers.

Facebook says it doesn’t need news stories for its business and won’t pay to share them in Australia – The Guardian.

News by the ton: 75 years of US advertising – Benedict Evans.

What Is Footer Bidding? – Admonsters.