Automatad Team
The last month of the quarter has started and we have started to see some rays of hope in the ad tech industry. Here are the latest updates.
Share Tweet Share

Accelerating the shift towards digital

The biggest advantage of digital advertising is its measurability. The impact of digital ads can be measured most accurately when compared to traditional ads like TV and newspapers. Due to this advantage, the ad budgets of the brands were already shifting towards digital. Citing multiple studies, CNBC predicts that the current pandemic will further accelerate the shift.

The proof of the trend can be verified by a report published by WARC which shows that digital was the least affected medium of advertising during the pandemic. 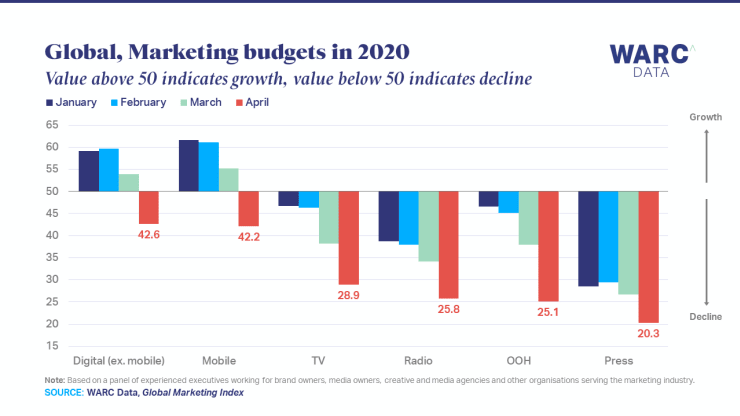 Increasing Facebook CPM is another positive sign for publishers. By the end of May, the increase in Facebook’s CPM was observed to be in the range of 20% and 50%. The ad prices are coming closer to the pre-COVID-19 level. It can be seen as the beginning of resumed ad spends.

How the markets are opening worldwide?

Digiday tried to find how media businesses are opening up around the world. While most countries have an optimistic outlook towards the future, negative consumer sentiments can hamper the speed of growth for publishers. Here is how the current scenario looks:

The Flattening Curve of Subscription

Publishers can expect rise and stability in ad revenue in the coming weeks. The economies around the world are opening up, this will result in increased ad spends by the brands. The problem of keyword blacklisting should also subside as the interest around the coronavirus topic recedes.

The pandemic has brought many unforeseen challenges in front of the publishers. The publishers are coming up with novel solutions for the problems as well. Recently, affiliate publishers took a blow when Amazon reduced the commission on non-essential products. In its response, Buzzfeed forged direct relationships with 1,000 retail partners. The company is witnessing an increased interest in online shopping, as a result, the conversions are higher than usual.

“Retailers also do not want to come across as trying to capitalize on a tragedy, so they are turning to BuzzFeed, and other publishing partners, to serve as a guide in approaching consumers in a way that comes across as helpful.”

Amazon is the biggest source of revenue for most of the affiliate publishers. But recently it has been observed that Amazon is making rapid changes in its affiliate program policies. If you cannot form direct relationships with retailers, then it is advised that you shouldn’t also be dependent on a single affiliate program. Keep your portfolio diversified.

With the easing lockdowns around the world, the earnings of publishers are definitely entering a better phase, but things are still far from normal. The industry wants to know when the normalcy will arrive, so do we. Different people have different opinions about things getting back to normal. Digiday reports that an average publisher expects that the businesses’ revenue will reach back to the pre-coronavirus level in the first half of 2021.

Another survey by IAB suggests that all publishers are not affected equally by the pandemic. 63% of US publishers experienced a “significant” or “somewhat” declined. For 8% of publishers, the CPM has actually increased. Publishers with direct deals are hit hardest. Decreased ‘ad budgets’ is being cited as the biggest reason behind the falling CPM. So it can be said that the ad budgets have to reach the normal levels before the earnings of the publishers reach normalcy.

Publishers have to hold tight until brands start to spend at a normal level again. It may take a few months. But since not all publishers are affected equally, we can say that the publishers who have been hit the hardest may take much longer time to reach the normal level of earnings and vice versa. A handful of publishers who are getting higher CPMs may or may not face any negative impacts.

How Will the Recession Affect AdTech?

The coronavirus pandemic has changed many status quos. If it converts to a recession then many more changes are bound to happen. Here is what Digiday suggests about what can we expect from a recession in the ad tech industry:

More publishers will turn towards their first-party data

With lower consumer spending, the buyers would expect more conversions to level the ROI. First-party data can provide conversions. Publishers would also try to improve their rates by availing the first-party data to the buyers.  If the preference for the publishers with the data increases, then most of them would be motivated to set up their databases.

Due to the same reasons stated above, buyers will try to save their expenditure by buying the media from optimized paths. Due to the increasing needs, the SPO efforts in the industry can be expected to intensify.

Cash will be the king

Due to the problem of sequential liabilities, the parties in the ad tech industry will be cautious with their cash. Companies would try to preserve cash to navigate through the difficult time of recession. Trust will become a key factor in transactions. Companies with bad payment history will face problems in catching new deals.

Publishers should prepare to use their first-party data. Even if the recession doesn’t hurt the industry, the data will still be helpful. Publishers should also preserve their cash for an uncertain future. Do not deal with ad tech vendors whom you do not trust.

What’s On The Table For Australian Privacy Law Reforms? – Which-50.

Next Post
How to Set Frequency...
0 Comments
Leave a Reply Cancel Reply