Automatad Team
Every week, we bring you the latest, publisher-focussed developments in the adtech industry, that are taking place in response to the coronavirus crisis. The aim of these updates is to help you with your strategies in this fast changing environment. Here is what happened this week.

Barstool, a sports and pop culture publisher, is expecting a 20%-25% drop in ad revenue in the short-term. The company is selling only things that can be controlled. For instance, pitching digital editorial products has a higher priority.  On the other hand, live events are completely out of the conversations because they can be postponed or canceled at any time. Smaller sponsorship campaigns are being chased in the hopes that the relationships made today will reap more benefits when it expands in the future.

Some publishers are avoiding big deals with retailers. The year 2020 has seen the bankruptcy of 8 different retailers so far, as a result, the publishers are fearful of the falter. Internal assessment measures are being prepared by the publishers to assess whether to sign a deal or not. More focus is on smaller deals that can be executed and paid-for faster. Shorter payment terms and upfront payments are some other safe harbors.

Bad Ads are cropping up:

BBC Good Food app delivered adult-rated ads as pre-rolls. Immediate Media witnessed a handful of low-quality ads. Similar instances of various kinds of malicious and improper ads are cropping up across the premium websites. The falling CPMs are the main cause of such instances. In the absence of bigger advertisers, smaller ad buyers are able to reach even the premium publishers.

Such advertisements can hurt the brand value of publishers. We suggest you keep your guards high with brand safety and anti-malvertising solutions.

On its face, the coronavirus pandemic looks bad for the whole world, but in reality, it is proving to be a boon for some business categories. One such category is direct-to-consumer products and services. Publishers are witnessing more activity in the DTC sector. Online retailers with a turnover of more than £10 million ($12.4 million) are replacing the larger retailers. As a result, publishers like the Washington Post are creating special turnkey and self-service products for such brands.

Since the spending is more in the DTC sector, we suggest publishers gather an audience that is suited for such brands so that you are not missing the piece of the pie.

It is very difficult to gain premium clients during the current state of affairs. Publishers should be focussed on smaller deals with quick executions to keep things running. Since DTC brands are performing, it will be ideal to search deals in this sector. Publishers should also safeguard themselves from bad ads to maintain their reputation.

The Washington Posts sees the demise of the third-party cookies as an opportunity for publishers to start from scratch. Its VP of Commercial, Mr. Jarrod Dicker believes that instead of trying to fix the current system and making it privacy compliant, the industry should focus on building a new digital advertising and media ecosystem with privacy at its core.

Google is ready to start the trial of its Privacy Sandbox that will replace the third-party cookie in Chrome. Google has started contacting the external adtech companies to take part in the experiment. All the updates of the experiment will be posted on Github.

Google is trying to find ways of user targeting without the use of the third-party cookie. A technique called Federated Learning of Cohorts (or “FLoCs”) will be used for the purpose. It will use machine learning algorithms to group people into audience segments based on their behavior. And, advertisers can target users in the RTB ecosystem, based on common interests, rather than using a pseudonymous identifier for each individual user.

There are many experiments to be conducted that will require the collaboration of DSPs, SSPs, and other adtech parties. For instance, ad exchanges can apply constraints on how much data can be revealed about a user in a bid request, the companies can try using the Trust Token API to assess the user quality, etc. The findings on all such experiments will guide the industry on how to move forward with the Sandbox.

The demise of the third-party cookie is unavoidable. There are no signs that it will be postponed due to the ongoing coronavirus crisis. Publishers have to prepare themselves with the appropriate strategies.

As the Washington Post suggests, start building trust with your users. We can expect the Privacy Sandbox to be the default mode for targeting in the future, publishers should stay informed about the developments so that they can bring the required implementations whenever the time demands it.

The alarming findings from a report from last week have created a buzz in the whole industry. It pointed out the issue of inefficient supply paths in the ad delivery process. If you missed it then here is what the report stated:

As we said earlier,

“These findings are alarming. The publisher receives only half of the ad spend, 15% goes to the fees and nobody knows where the remaining 34% goes? Apart from this, if we factor out ad frauds, the publisher will be left with less than 50% of the total ad spend.”

Now, Digiday has suggested some potential reasons behind the unknown delta. The discrepancy between DSPs and SSPs due to the difference in the ways of calculating the data can be one of the reasons. Post-auction bid shading, ad reselling, trading deals, current fluctuations, money lost to ad fraud, discrepancies between the advertiser and publisher over brand safety, incorrect geo-targeting or suspected bot traffic can be the other potential causes of the “unknown-delta”

The measures for Supply Path Optimization are also picking up. After The Trade Desk, now MediaMath has also started building a new supply chain that will exclude the SSPs that sell duplicated impressions. Due to bid duplication, the demand side losses money whereas the supply side makes more money. To bring balance in the situation, SPO is the necessity.

Reformative measures to improve transparency are badly needed. The discrepancies should be mitigated, the ad frauds should be clamped down, supply paths should be optimized if we want the adtech industry to thrive. The buy-side will be more motivated to work directly with the publishers as such reports keep coming.

The Wallstreet Journal recently reported that federal and state officials are likely to file antitrust lawsuits against Google later this year. The lawsuit will be regarding the alleged anticompetitive behavior that helps Google in creating its dominance (or monopoly) in the online advertising space. The justice department has been probing Google on this front since mid-2019. Wired has come up with 20 different ways in which

Google may have broken the law on its road to creating the alleged monopoly. The focus of the case is not whether Google is the biggest player in the game, but the focus is to find out whether Google has suppressed the competitors to reach its dominance.

On the other news, Google has announced that it will start blocking resource-heavy ads on Chrome. The move has been taken to save the users’ battery, network, and money. Poorly programmed ads and crypto minings ads are some examples of such ads. The ads will be blocked in three cases:

The changes may be implemented by the end of August. According to the data, only 0.3% of ads exceed the threshold. 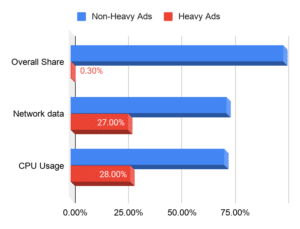 Heavy ads are not a pressing problem as they represent a very small fraction of all the ads present on the internet. We do not think that it would have any noticeable impact on the publishers. On the contrary, it will enhance the user experience by faster ad delivery and the safety of the user from advertisements.