So far the COVID-19 crisis was proving to be a havoc for publishers. The majority of the publishers are struggling to monetize the increased influx of traffic. But as it happens with every problem, people come up with solutions to save the day. This is why a few publishers saw a mixed effect of the pandemic in the past week. Here are some noteworthy updates:

The first to suffer from the crisis, China is also the first to show the signs of recovery. The lockdown started to ease and business activities started picking up. As a result, marketers are rolling up their sleeves and publishers are already observing an uptick in the revenue from China.

Digiday reported various instances of publishers regaining the lost grip around China. An international news publisher is on its way to sign three contracts, another publisher has resumed the paused campaign from Hong Kong. Chinese giants like Huawei and Alibaba have also started working on their commercial activities.

Now here are some important numbers that will help you with your strategies during the crisis:

A Digiday survey reports that 75% of media buyers are witnessing reduced spend from their clients. 73% of them are also saying that their clients are pausing their marketing expenditure entirely. 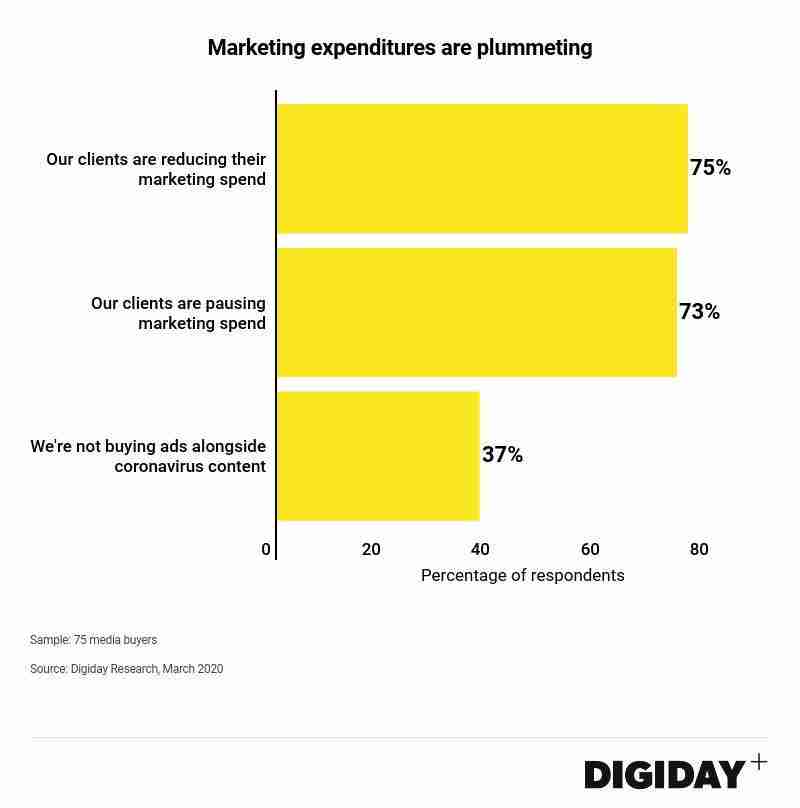 New data from Parse.ly suggests that almost every content vertical is seeing increased demand, busting the myth that only coronavirus content is being sought by the readers. Shopping, Health, and Personal Finance are among the top categories. 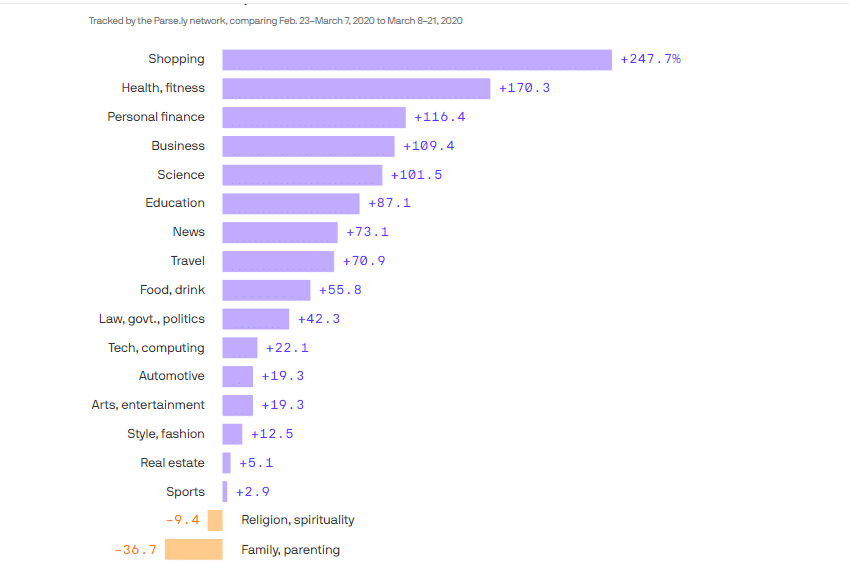 How publishers are maneuvering in the COVID-19 storm?

Skift, a B2B publisher that makes 40% of its revenue from events says that 25%-30% of the revenue from in-person events can be covered with virtual events. The company also experimented with its webinars where it gave the attendees the freedom of paying whatever amount they want, the average revenue per viewer came out to be $37.

Augustus, a Dubai based digital media company has increased its focus on developing direct-to-consumer products. Currently, the company is working on a membership program for its lifestyle websites – Lovin Dubai and Lovin Saudi. It is also working on a streaming service called Smashi TV.

Patch, a hyperlocal news site is hiring new employees as it saw March 2020 as its strongest month ever. Unlike regular publishers, the site earns money from site sponsorships for targeting its hyperlocal audience. It also deals with the sale of hyper-local events to its audience.

Digital spendings are low and it will definitely have a negative impact on publishers. But as we can see the situation in China, it is safe to assume that the problem will not persist for a very long time. It is evident from the Paarse.ly data that opportunities still exist for publishers but the real winners are those who have diversified their revenue sources.

Last month we discussed the perils of sequential liability — when one party in the ad delivery chain fails to pay (say DSP), then the losses are borne by all the subsequent parties in the line (Ad Exchanges, SSP’s and Publishers). Recently, many insurance instruments emerged to cope with this problem. Given the volatility of the current situation, it is time to safeguard ourselves with the help of such instruments.

OpenX sent a note to its partners, informing them about the measure it has taken to safeguard from DSPs’ payment default. The company has partnered with Euler Hermes that operates internationally and insures over $1 trillion in exposures. Euler Hermes will provide credit insurance to OpenX for the outstandings from DSPs. Nearly 87% of the balance of the partners has been covered so far. Low-risk DSPs such as Amazon and Google are not being covered.

What should publishers do?

The current situation demands the publishers to be watchful. You should pay attention to whom you are working with and choose your partners wisely. You should not be hesitant to take measures like insuring your receivables. Try working with partners that can provide you the necessary protection against defaults.

Being proactive is a prudent move. Find out the options you have to deal with the situation. The incomes are already low, a payment default can worsen the situation. Some companies like Pubmatic are already providing payment protection plans with an additional fee, so insurance companies are not the only resorts for you.

So far Amazon used to have two paths for the customers to reach it via affiliate links. The first path was direct where publishers used to add Amazon’s link to their websites. The second path was indirect where the affiliate networks used to have a pool of publishers and the link used to go through the networks before reaching the publishers. The affiliate networks used to earn a commission for every sale made from their pools. Additionally, the networks also had partnerships with other affiliate programs and were capable of adding links to Amazon’s competitors. But now, the second path has been broken. Only the direct path exists.

This move will not only optimize the supply path but it can possibly reduce the competition for Amazon.

What’s in there for Publishers?

Affiliate networks like Sovrn //Commerce have the ability to dynamically insert affiliate links to publishers’ sites. The dynamic insertion was based on various factors like commission, purchase history of the user, the likelihood of conversion, etc. It provides the publisher with the ability to earn more from affiliate sales. Amazon was one of the merchants among many others. But, due to the factors stated above, Amazon had a lot of importance. Therefore now publishers will either have to choose between Amazon and the networks, or they would have to come up with new strategies to reap the benefits from both of them.

‘The world isn’t going back to where it was’: Publishers grope in the dark for signs of what’s to come – Digiday