BidSwitch, a subsidiary owned by IPONWEB recently published Programmatic Insights 2019. Here are the key findings that matter to the publishers:

Global ad spend on mobile devices is increasing whereas the ad spend on the desktop continues to decline. 48.7% of ad spend went to mobile devices in 2018, whereas in 2019, the share increased to 57%. The share of PC came down from 43.9% to 33.8% during the same period.

Native formats are on the rise

The growth of native formats has been way faster when compared to display ads between 2018 and 2019. Bid requests for native formats grew by 70% in 2019 whereas display saw an increase of mere 7.5%.

Ads.txt is the norm

Ads.txt has been adopted by almost all the publishers. In 2018, only 69% of the publishers were using ads.txt whereas in 2019 the share of publishers using it increased to 88%.

When comparing the Q4 of 2019 to the Q4 of 2018, the rise of spending on header bidding and the eCPM can be seen worldwide. 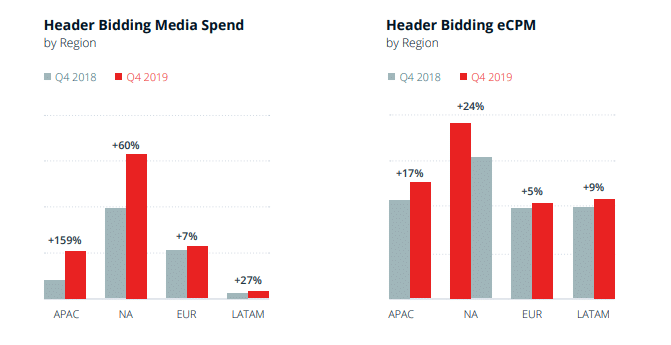 Considering all the numbers from the report, it is clear that there is an increasing shift of advertisers towards mobile users. So, ensure your website is optimized for mobile. And, make sure advertisers are able to run native ads on your site. Using Ads.txt is almost unavoidable and not implementing header bidding will mean that you are missing on a lot of potential revenue.

As the cost of buying ads is reducing and the traffic is surging, an increase in malvertising activities can be seen in the industry. Clean.io, the company that helps publishers in fighting with malicious ads released the data that says that malicious activities have increased 50 times when compared to the numbers from early March. 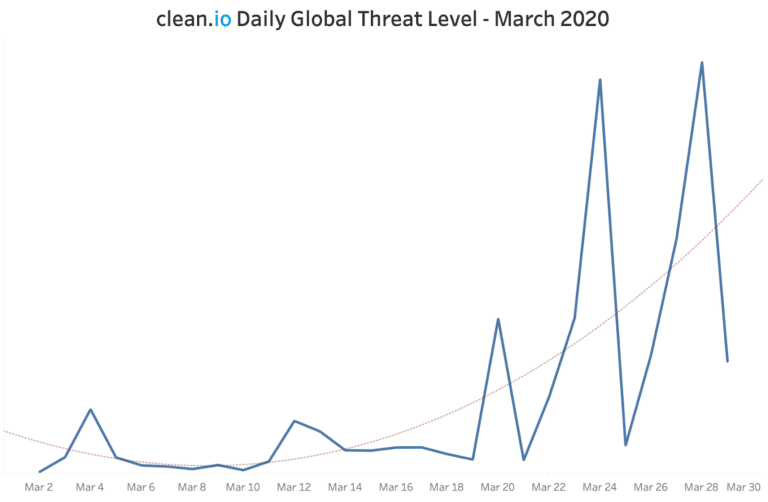 To be precise, the company used to see only 0,02% of pages with malvertisements but now the percentage has risen to 1%. Many malvertisers can be seen as falsely representing themselves as well known brands. 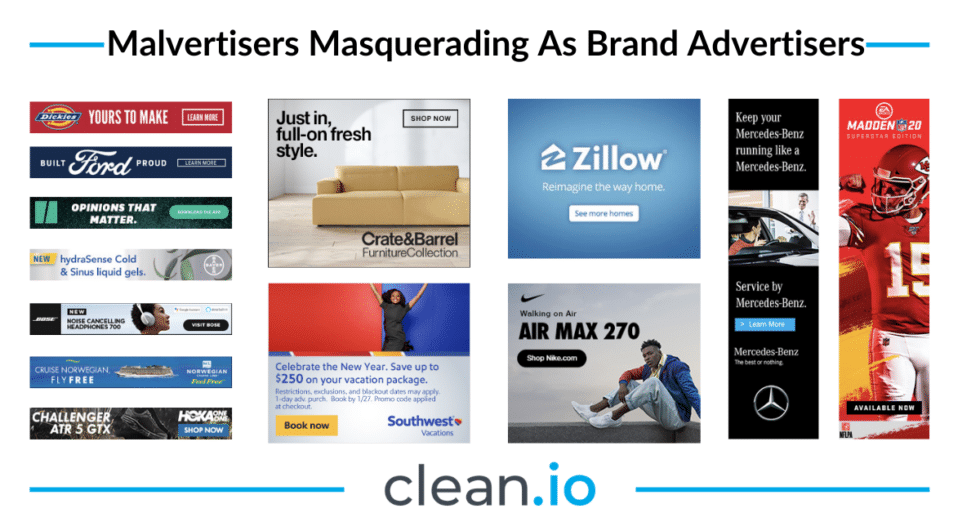 There can be many motives behind malvertising. For instance, malvertisers can extract personal information from your visitors by taking them to fake landing pages. They can also hack users’ devices for making fraudulent clicks, video stuffing, pixel stuffing, cryptojacking are some of the many potential ill wills of malvertisers. It directly hurts the brand of the publishers.

Malvertising can not only hurt the users’ trust in the publishers, but it can take away the revenue, as well as the user experience from the publishers’ websites. What publishers can do is keep an eye on the ads being displayed on the sites. At the same time, implement fraud detection solutions to safeguard your site 24×7. Working with trustworthy demand sources will be a great proactive measure.

CCPA Will be Enforced as per the Plan

The COVID-19 outbreak has brought many unexpected challenges in front of the adtech industry. So, many parties tried to see if they can push the respective players to postpone events including Google ending third-party cookies, CCPA, and SameSite cookie rollout. Here are the updates:

In the wake of the Coronavirus crisis, W3C Business Group recently approached Google to postpone the end of third-party cookies in Chrome. The group consists of 136 members from across the ad industry, including MediaMath, Rubicon, Taboola, Neustar, Apple, Google, Amazon, Facebook, Adobe, Criteo, Salesforce, CafeMedia, IAB Tech Lab, etc. It develops standards and protocols for the web.

In response, Marshall Vale, (a Chrome product manager) said, “a discussion around adjusting timelines is premature.”  So, we can say that the expiration of the third-party cookie will not be postponed.

A trade group representing Google and Facebook has approached California attorney general to postpone the enforcement of the CCPA law till the next year. The law already gave a little time for the ad tech parties to make necessary arrangements to comply with it. The disruption caused by the pandemic has further increased the difficulties of the parties.

The Attorney-general, however, is committed to enforcing the law starting July 1. Additionally, privacy companies believe that since a lot more than a normal number of people will be using the internet during the crisis, there is even a bigger need for privacy protection.

Unlike the above two cases, the case with the SameSite cookie update has brought some good news for the publishers. Chrome announced that the SameSite Cookie update will be temporarily rolled back. The rollback is being done to ensure that essential services like banking, online groceries, government services,  healthcare, etc do not face disruption at the time when they are needed the most.

As we all try to adapt to the recent changes amid the COVID-19 outbreak, ad agencies are funneling the spend to a handful of SSPs. Last week, Digiday talked to several agencies and ad tech vendors to see how they are embracing partnerships and post-auction discounts. Here’s what you need to know.

It’s not new — ad agencies have been dealing with SSPs directly to get preferred supply and better ad rates.  But when agencies finalize deals with SSPs, there’s always issues around rebates, prioritization (buying from one SSP over others), and transparency. Agencies tend to initiate such deals as the reward outweighs the risks.

While bid prioritization and bid modifiers aren’t completely new, the discounts now happen after the auction is won in the exchange. If you are a publisher, you can agree to receive a price that’s actually lower than the winning price from the auction so that you can get more impression buys from the agency (post-auction discounts). The discounts are known to all the parties including publishers and the clients.

For instance, GroupM partnered with Index Exchange to win auctions with post-auction discounts. It is expected to expand the same to the auctions powered by other SSPs. The idea is to get better deals from the publishers who are willing to reduce the ad rates for individual impressions in exchange for bulk deals.

“If a publisher awards the impression to the GroupM and Index Exchange enhanced bid, and the actual payment received is X% lower than the winning bid price, that will be an issue for many – and rightly so”

For now, Index Exchange developed the tool with GroupM, but it’s pitching the same to other agencies as well. Similarly, Rubicon Project and Xandr have the feature to help the buyers who would like to leverage such deals.

The discount isn’t the issue here. Publishers have been setting up different floor prices based on the agencies for a long time. But it is the publisher who fixes the floor price, changes it, and has complete control over the process. Some publishers are concerned that post-auction deals can take away the control and make it difficult for publishers to measure yield as the winning bid isn’t the actual fee paid.

However, agencies continue to see how they can leverage such deals and only work with a handful of SSPs. But not all agencies are trying to pitch discounts. Some are figuring out a way to get more data on the bids they’ve won and lost and use the same to help their clients.

Whatever the case is, the spend is being consolidated and agencies don’t want to disperse the campaign budget to many partners. As we always say, it’s better to keep your stack updated with the top demand partners.

Sara Fisher from Axios covered an interesting story on how ad spends will change due to the crisis and here’s the chart highlighting the same. 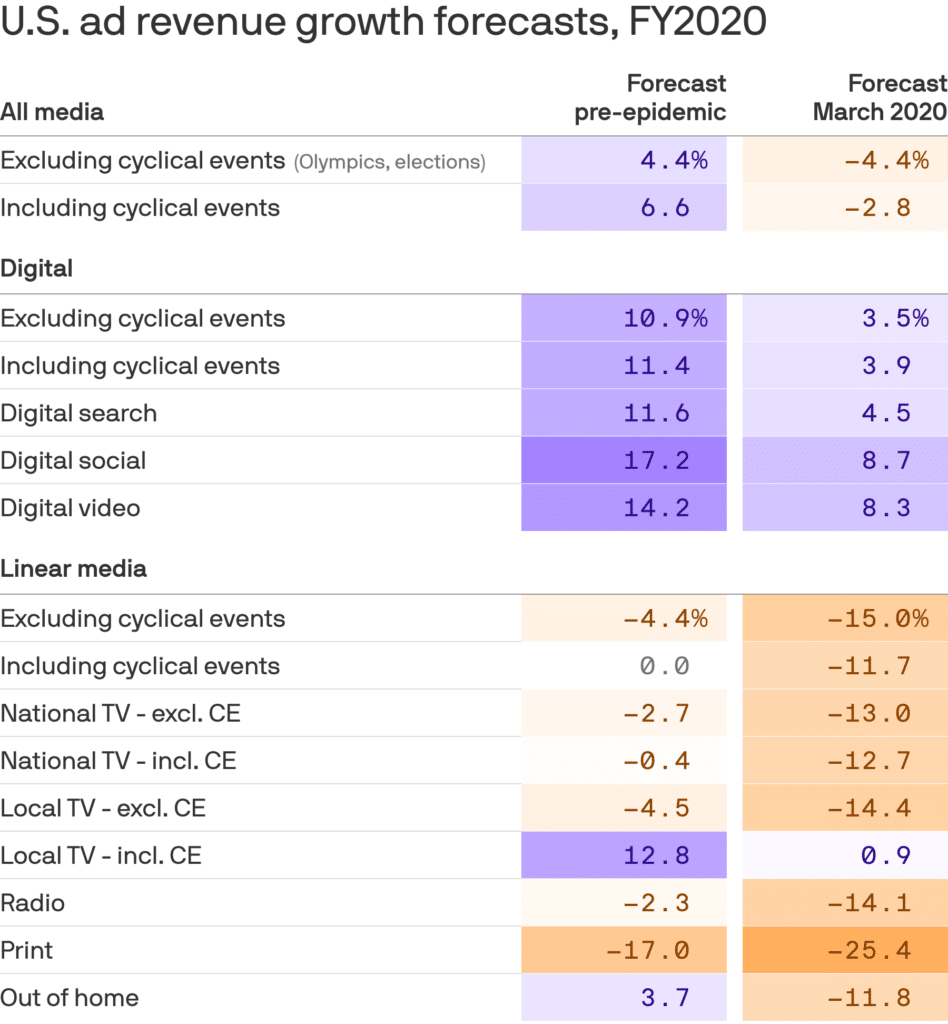 How entertainment publishers are adapting their coverage? – Digiday.