Automatad Team
“Publishers understand that we compete for briefs, but on a macro level we are not really competing with each other but with the platforms.”
Share Tweet Share

We know you are aware of the fact that Chrome will phase out the support for third-party cookies in two years and the SameSite cookie update will be rolled out in a week. So, we aren’t going to talk about ‘Privacy Sandbox’ in this roundup. Let’s wait till there’s a significant change in the draft. As of now, all we can see is a couple of proposals that may or may not be approved.

Last week, Digiday interviewed several media groups and adtech companies to understand how they’re preparing for the cookieless future. We’ll get you the highlights.

One of the discussed solutions is building audience segments using publishers’ first-party data. This is similar to Google’s Federated Learning of Cohorts (FLoC). FLoC uses machine learning to track the browsing behavior of users and then, add them to groups (cohorts) based on it. In this case, segments are created based on how users are interacting with the publishers’ online properties. Permutive is the one trying to pull off the technique, but it understands that the industry needs to be on-board to make this work.

The consortiums have to come up with common names for the audience segments based on the taxonomy. The same can be used to bid for ad impressions.

“Over the next few months, an IAB Tech Lab working group will pose questions about the proposal and run test campaigns to discern the effectiveness of this method of trading audiences.”

The industry believes it is better to have an alternative to Google’s technology (Privacy Sandbox) and contextually mapped audience, if proven, should be enough to lure in more participants from both sides.

Apparently, not a single publisher can put its first-party data to let advertisers target effectively. Because advertisers need scale and personalization. That’s why:

a) Media groups are combining their assets and allowing marketers to run targeted campaigns across all the owned sites with the help of self-serving ad platforms. Examples include Vox Media and The Washington Post.

b) Publishers are also joining hands to form alliances and unified/shared log-in. In the recent past, media companies weren’t interested in sharing their first-party data as they wanted to stay competitive. But now, the entire media industry is realizing that the spend will be directed to walled gardens unless there’s a compelling offer from the open web.

“Publishers understand that we compete for briefs, but on a macro level we are not really competing with each other but with the platforms.”

One, it’s time for you to start building first-party data. Regardless of whatever happens or whomever you choose to pair up with, you need to understand your audience. And, the industry isn’t willing to repeat the same mistake again. So, keep up with the latest updates and developments.

“The general feeling is that [Google Privacy Sandbox proposals] make sense. But the concern, as usual, is that if the industry is dependent on Google creating the solution, then once again they are able to dominate and control an important aspect of the advertising ecosystem.”

Let’s continue with the first-party data. We just said it is important to collect and use first-party moving forward. AdExchanger talked to WebMD, one of the leading sites in the healthcare industry to understand how the publisher is using its data to optimize ad campaigns.

WebMD is a site with 80 million monthly users and it booked $20 million in revenue via sponsored content program alone last year. As the site is focused on health-related content, the publisher managed to close several healthcare giants.

But, being contextually strong isn’t the only pitch WebMD used. It worked with the advertisers to use the first-party data to build, run, and optimize campaigns. For instance, while partnering up with Certain Dri, a prescription-strength antiperspirant for hyperhidrosis, the publisher derived that readers searched for terms like “excessive sweating”, not hyperhidrosis.

So, WebMD came up with a tool to help users to check whether their excessive sweating should be treated with Certain Dri or not.

In addition, publisher inked a deal that lasted several months, as opposed to running campaigns for a few weeks. This means, there’s a huge reduction in content production cost.

“We think from the standpoint of not only winning new business, but how to sustain that business.”

Though you aren’t generating hundreds of millions of page views, you can still reap insights to direct your sales team and programmatic strategy as well. All you need to do is, start looking at your own data and see what can be added to get a complete picture of your audience.

Publishers Left Billions on the Table Due to Keyword Blacklists

Recently, an ad verification service provider named CHEQ published a study with shocking revelations for publishers. According to the report, the major part of publishers’ inventory is being blocked for no valid reasons. Due to the faulty blocking criterion, a lot of completely safe and uncontroversial content is not receiving the ads.

The culprit behind this catastrophe is the inefficient practice of keyword blacklisting. It enables marketers to stop their ads from appearing on the content that contains the keywords that the marketers have blacklisted. The idea behind keyword blacklisting is that the presence of words with negative connotations means the content is also negative and therefore it is not safe for a brand to show ads on a negative piece of content.

The problem with such an approach is that it doesn’t consider the context of the words. Due to this problem, a news article about photography may get blocked because it contains the word “shoot”. Similarly, sports news can contain words like “injury”, “attack” etc. Entertainment articles can talk about movies and tv shows with names like “Killing Eve”, “Walking Dead” etc.

Currently, there is no perfect solution to the problem. All that a publisher can do is avoid words with a negative connotation, which of course is not completely possible. Currently, an advertiser’s blacklist can contain from 2000 to 4000 words. To make the matter worse, the use of such blacklisting is increasing. We hope that better tools for blocking the right content will come to the market soon as the current problem is harmful to both the publishers and advertisers.

According to eMarketer, PMPs will surpass Open Market (in terms of ad spends) for the first time in 2020. Until now the industry was dominated by Open Market exchanges. The preference for PMP has been increasing for a long time due to factors like brand safety, transparency, premium inventory, etc. The deprecation of the third-party cookie and the need of first-party data has further strengthened the growth. 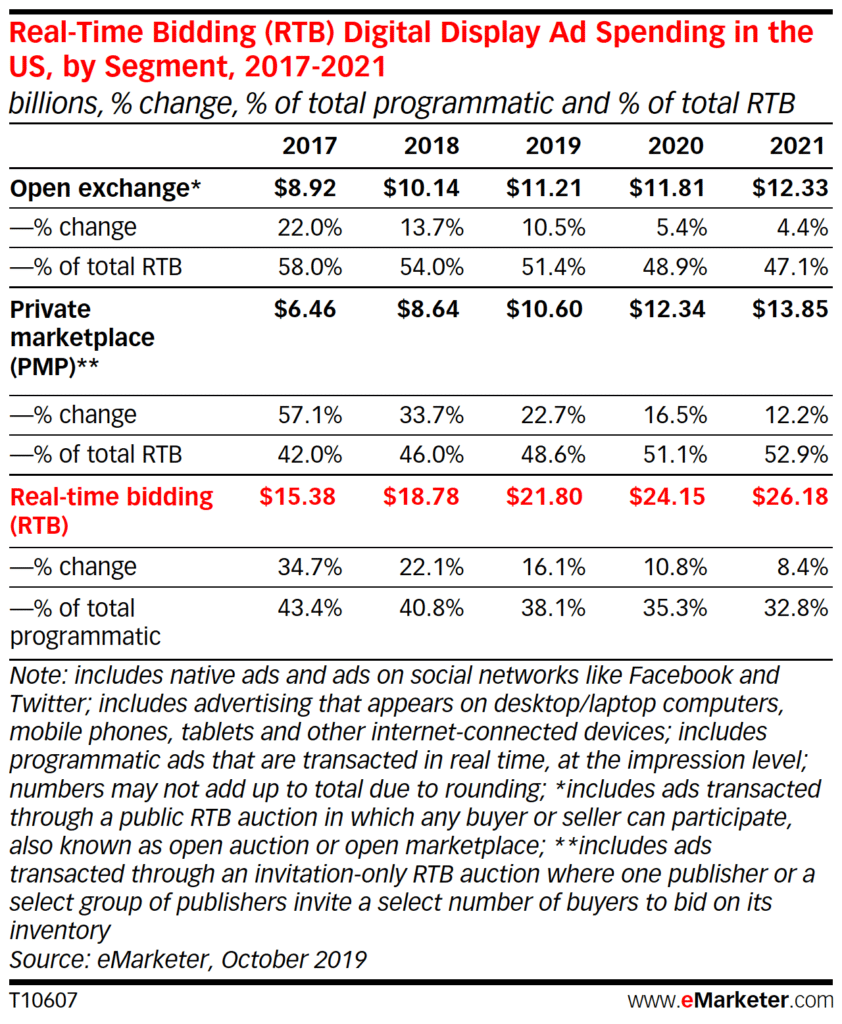 The transition towards PMP and Programmatic Direct is not new. Now since we know that the advertisers are shifting towards a more private setup for buying media, it makes sense for us to have a mix of both in our strategy. While private setups will provide us higher returns, the open market will help in filling our remnant inventory.

After Google Finally Really Did It, A Necessary System Cleanup – AdExchanger.

Publishers and marketers are mostly absent from key group deciding what comes after the third-party cookie – Digiday.

The Rundown: With what comes after the cookie unclear, ad tech is left in limbo – Digiday.